Summer is such a fun time to try new things.  The long days with less to do, lend themselves perfectly to experimenting with stuff that we often don’t have time for during the regular school year.  This summer, one of my sons has been trying his hand at several different art forms.  One of the latest summer craft ideas he has tried, which has been a real hit, has been using a 3D pen.

I was given this product for free and will be compensated for my time, but all of my opinions are honest and I was not required to write a positive review.

My youngest son loves techie toys so when he got a chance to try an Atmos Flare IDO3D pen, he was thrilled.  He recently took a computer class called 3D Modeling and Printing so he was eager to be able to make similar 3D-type items himself.

When the IDO3D Pen kit arrived, we were surprised at how much it included.  There were four separate pens with tips, a sheet of templates, a plastic sheet, and two different sizes of cups to use for making your 3D items.

One important thing to keep in mind is that you aren’t going to be able to make something as complicated with inexpensive 3D pens as you would if you had a high-tech 3D printer.  3D pens are more suited to creating artistic projects that they would be for creating anything precise.

They also require some time to become adept at using them.  And we’ve found that having a template to follow definitely comes in handy.  Fortunately, the manufacturer has provided quite a few templates for your kids to choose from.

When you’re assembling your 3D Pen, here are some tips to make the process go more smoothly:

When first putting a tip onto a pen, you will need to twist them the way the arrows on the end are pointing.  This is a bit tricky because it’s actually the OPPOSITE way that you would normally loosen or tighten something.  Normally, you would turn left to loosen and right to tighten.  For the IDO3D Pen, you’ll be twisting in the opposite direction.  Keep this in mind because you’ll need to remember it whenever you put a tip on a different colored pen.

After you have the tip firmly on the pen, you’ll want to twist the tip so that it is fully open.

Before Using the 3D Pen

Before you start using your 3D pen, there are some tips you should keep in mind:

First, you’ll want to have a piece of paper towel handy so that whenever your pen drips and the ink hardens, you can easily wipe it off.

How NOT to use the Template. Oops!

While Using the 3D Pen

The ink should come out easily when you squeeze the pen.  If you find yourself having to squeeze extra hard, check to be sure the top of your pen is opened all the way.  Unscrew the tip a little bit and then pull to get it fully open.  Also, if the pen has hardened ink in the tip, it will be hard to squeeze.  Wipe your pen on the paper towel and this should take care of the problem.  (For very big clogs, you may need to use rubbing alcohol to clean the tip.)  And before you start drawing, you’ll need to shake the pen so that the ink will travel down to the tip.

Even though this is a 3D pen, most of the drawing you do will actually be on a flat surface.  Your creation will then harden and you will be able to assemble the pieces and stand them vertically.

While you are drawing, the light on the pen will harden the ink enough for the lines to stay in place and for you to continue drawing.  In order to help your creation dry completely, however, we found that setting it outside in the warm sunshine will help your project to draw into the hardened plastic that you want it to be.  It will then easily pop off of the plastic surface on which you have created it as well.

While drawing, you will want to pause to use the drying light fairly frequently so that the ink won’t run outside of the area where you intended for it to be.  Consider drawing the outline of whatever you’re creating, drying it with the light, and then filling in between the lines and drying that as well.

With a little bit of practice, your child should be able to come up with some clever creations!

The palm tree was created over the span of a couple of days since the trunk and the leaves were allowed to sit outside and fully cure before work continued.  Once they had hardened in the sun, however, they were hard plastic like a toy you would buy in the store.

Here are some more awesome examples of projects you can create with this 3D pen kit:

Like any type of art medium, it takes time and patience to learn the techniques for creating amazing creations like the ones you see in these videos.  Fortunately, there are some FREE Atmos Flare art courses available for your child to help him or her perfect their technique.

The IDO3D Pen Kits are a fun way to spend some time during the long afternoons of summer.  They do require patience and a steady hand.  But if your child is willing to take the time to learn the techniques, some awesome creations are right around the corner!
For more information about the Atmos Flare IDO3D Vertical Kits, please follow them on Facebook, Twitter, Pinterest, YouTube, or Instagram. 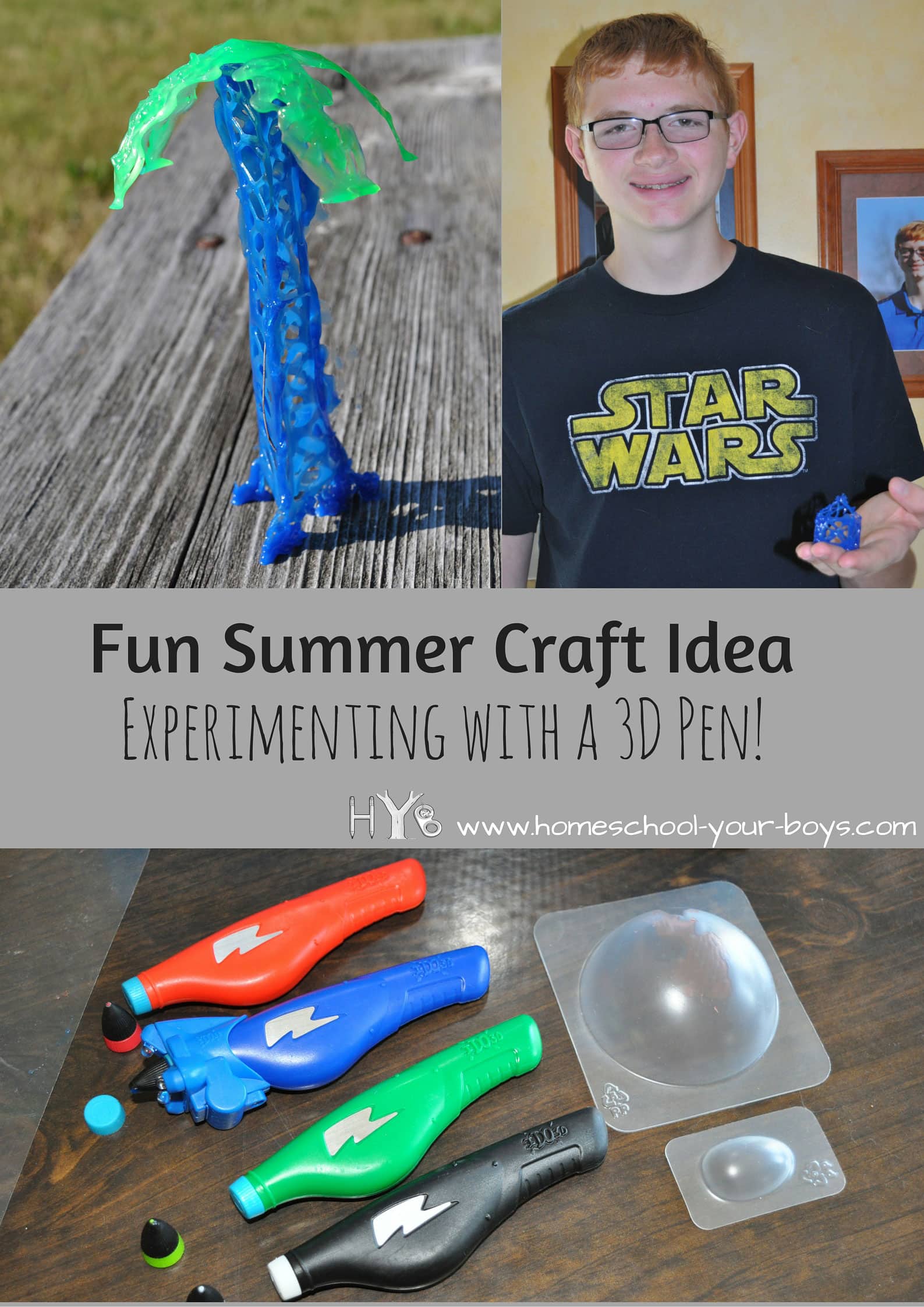 Like this 3D Pen? Please pin this for later!

Question:  Has your child ever tried using a 3D pen?  What kinds of projects were they able to make successfully?  Please leave a comment below.